What does your agency ride in...

It is a nice looking truck.

While they do drive nice, You will find that they have their own problems. Where I used to work, we bought 5 of them. We had more problems with the Chevy's then we ever did with the Fords. All had major engine and drive train problems before they even got 10k miles on them.
The interior is very uncomfortable, if you are in the truck for a while. All our crews were asking to be put back in the Fords.

BTW- what do you mean by a smaller engine? The 6.4L is the most powerful engine Ford has ever had!
" This is Nucking Futs"

yes, they are more "cooped" up in the front, and since we are a SSM service, it's not the most comfy truck for a 14hr shift, but I still like it. It will have issues no matter what the way we run out buggys ragged. our Frazer that we purchased last year is being sent back at the end of this month to be repaired. Evidentely the Frazer rep did'nt believe how bad we can tear up a truck and asked for our fleet manager to take pictures of the wear/tear on the unit. When he recieved the pics, he requested that we send the unit back to them for evaluation so that they can see where the weak points are. We have had it since April of last year and its got 62k on it already, and has held up better than our McCoys to this point.

It may be a larger engine at 6.4L compared to the 6.0L from2003-2007, but it does'nt act like it, and was'nt designed to. "...system is designed to result in almost no turbo spooling when taking off from a stop. The sequential system is set up to provide a better throttle response while in motion... "

When you stomp on the gas (say clearing a Red Light...) it takes about 2 seconds before the Turbo actually kicks in and goes. The previous generations would get-up and go when you stomped on it. I dont make a practice of stomping on the gas, but it is needed some times. I try to take care of our trucks, but with a different truck every shift, it's difficult to get the others to do the same.

We have 7 F350 2008's that are McCoy Remounts. One was an early version that had issues with the particulate burner thing on the exhaust and was shooting flames out the tail pipe and was out 3 months. 1 was totaled in an MVC 3 months into service in an ice storm. 1 was involved in an MVC, heavily damaged box, possibly repairable, been out 3 months. 1 has blown a turbo, and another blew an oil line way up inside the engine. Both have been down 2 months. That leaves us with 2 that haven't had any issues, 2 involved in MVCs (not a mechanical thing, I know), and 3 that have had major mechanical issues.
I'm BAAAAAAAAAAAAACCCCCCCCKKKKKKKKKK


We are all slaves to the god Motorola who requires sacrifices of hot meals at least once per shift.
My "bull S#*%" flag is in the holster on my left hip, but the "Oh S#*%" one is in the speed draw on the right hip

I hear you. Those really are not major problems though. Even the 6.0L has the hesitation off the line. No turbo can give instant power, they all have to spool up with exhaust pressure.

My old system was full SSM. We had all Frasier's and they held up better then any other unit that was tried. Every thing out there will have problems, if the system allows them to be abused.

That is my biggest pet peeve. People that treat the units like crap, because they don't own them. That is why maintenance costs go up and pay rates don't. It is hard to get some morons to understand that!

Hope you have better luck with the Chevy's. Watch out for bad heads and turbos. Also be ready for the rear ends to fall apart. They do drive great, but are not designed to take the abuse of 24/7 EMS use.
" This is Nucking Futs"

reaper said:
They do drive great, but are not designed to take the abuse of 24/7 EMS use.
Click to expand...

And thats how we run some of these trucks, 24/7, mainly in the summer or winter when the AC/Heat craps out causing there the be fewer inservice units. I come in at 1730, and I typically have to wait for a truck that gets off at 1745 to come back to Grady in order to have a Unit. So that truck has been running since about 0400, and I'll run it until 0700ish the next day, if we get off on time:unsure:.

I tend to take care of the trucks because, well, when you're sitting at post, might as well wipe down the back, or clean the windows, or tighten any loose screws on the paneling that you see.

Our Frazer has held up beautifully compared to the McCoys, I hope that all our "new" trucks are awarded to Frazer. I think the only mechanical issue was a bad spark plug on the Onan Generator that was an easy fix, everything else has been fine mechanically. Normal wear n tear is another issue, and that's why the folks at Frazer want to take a look at it and see if they can identify any weak points to fix in the future, kudos to them.
I'm BAAAAAAAAAAAAACCCCCCCCKKKKKKKKKK


We are all slaves to the god Motorola who requires sacrifices of hot meals at least once per shift.
My "bull S#*%" flag is in the holster on my left hip, but the "Oh S#*%" one is in the speed draw on the right hip

hopefully by the end of the month we will have our new unit a Freightliner chassis with a Horton Box. I believe it will be the same paint scheme except it's gonna have chevron reflective pattern on the back. If you have seen the Baltimore County Career medics, that is what ours is going to look like except for the paint scheme. I can't wait. Ill post pics when we get it.

1- MCI bus
1- MCI supply truck (backboard, generators, oxygen, stuff like that)
2- MCI trailers (more of whats in the MCI truck)
1- MCI portable tower (cannot remember how tall it gets) its mounted on a trailer

We use wheeled coach medic series chevy crusader plus and we have 9 van style plus one mod
http://www.wheeledcoach.com/pdf_files/stock_crusader_plus.pdf

Stickied, so I figure I can't get in trouble posting in it. :glare: 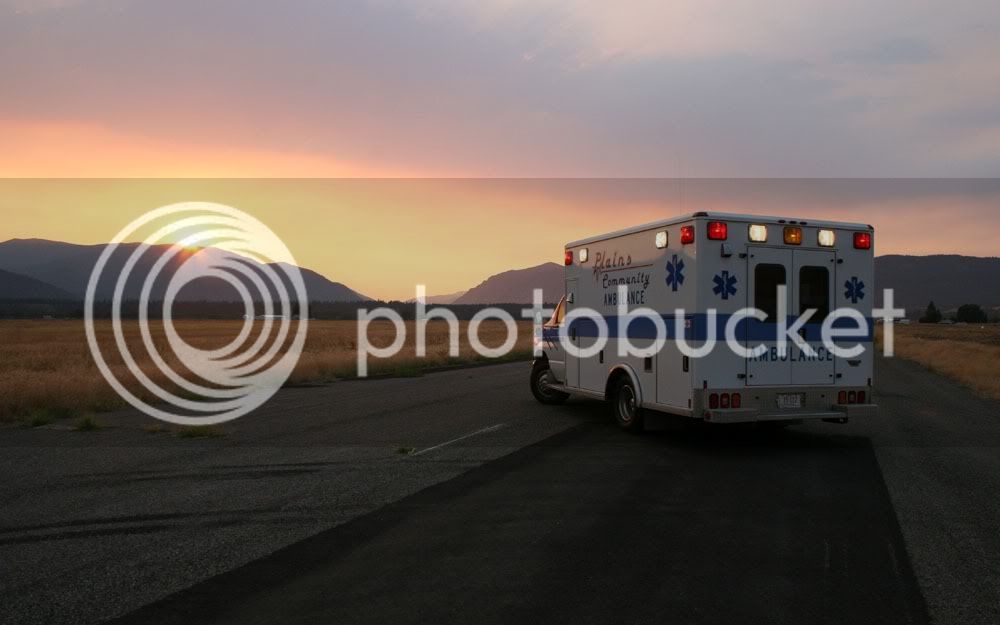 Wheeled coach, older 2000 ish model but I love it. 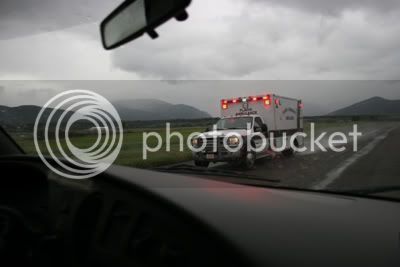 MedTec, new model, about two years old, have had no end of problems with it, including a crew getting stranded for seven hours. The box is huge, however, and it can fit a small army.

Used to work on a vanbulance, and about to do so again, but this time in the city. Glad that I'm short.
E

These are the two rigs we run. both are Fords, and I believe PL Customs.
Last edited by a moderator: Dec 13, 2008

General George S. Patton said:
If everybody is thinking alike, then somebody isn't thinking.
Click to expand...

Here is our newest rig.

General George S. Patton said:
If everybody is thinking alike, then somebody isn't thinking.
Click to expand...

Here is our new one it just went in service nine days ago on the 12th of December. It is awesome. It's a 2009 Freightliner Chassis with a Horton Emergency box. Here are some pics and yes it is absolutely bad*** and great to take calls in.

Alrighty, the first of our 08-09' Sprinters are in. To fill you in, recently our hospital went from being managed by a Government entity (Fulton-Dekalb Hospital Authority) to a private/non-profit corp. During this process, Kaiser Permenente donated $1.5 million to the EMS dept for 10 new, fully equipped ALS units. Staff voted for continuing the Chevy chassis we have now, but mgmt determined that if they went with Sprinter chassis' and a different pt compartment config that they coulg squeeze 12 new units out of the $$$.

Without further delay, the first of our new units, 266. You can see the old pain scheme in the right side of the frame on the rear view. And yes, the checker-board is 100% reflective Scotchlite, I'll get better pics when the unit is unlocked and I can explore it a little better.


We are all slaves to the god Motorola who requires sacrifices of hot meals at least once per shift.
My "bull S#*%" flag is in the holster on my left hip, but the "Oh S#*%" one is in the speed draw on the right hip
M

This is Netcare911 privetly owend company. I can't find the other privately owned company er24, or metro & province buses. Now you know what South Africa works with, not bad for 3rd world country. Sorry bout the size of the pic's. These are old buses I will try get the new 08 busses

Last edited by a moderator: Dec 25, 2008
Don't drive faster than your guardian angel can fly.

Anger is one thing you cant get rid of by loosing it.B)

I recently took a trip to South Africa and seeing your post of the Ambulances was nice. It should be noted that the current ambulances look similar, but like you said are much newer. Also in S.A. the ambulance chooses whether or not to transport a patient based on what the problem is. As one of there techs told me, if the patient has a complaint that is a non-life threatening, really doesn't need an ambulance (we all know those) problem, then they will tell them, in his words "get f****d". I can see where this would be a problem in our system. But as you say, for a third world, they really are very advanced. Their system is much like ours and in most cases a physician rides with the rigs. Also it should be noted that they are not a part of the fire departments and the ambulance is responsible for all extrications at motor vehicles accidents.

We were in Cape Town, and PE. Medic, is it different in Jhb?
M

Thanks for the post, I never thought of S.A to be even close to your guys standard.

Your very rite about not been part of the fire station. Normally you will find them at their bases witch could be a hospital or and office block of the company(Netcare).

But province works out of both fire stations and hospitals.

The thing about Cape Town is it has the best provincial/metro (run by government) in the country so it’s also really sharp there also because of the tourists, you also have to keep in mind the over and above normal calls, e.g. Chest pain etc in Cape Town and P.E it’s got the sea, drowning shark bites surfing injuries etc. Check out his link to Western Cape metro. http://www.metroems.org.za/

I dont know their system to well but ill find out if you want.
Don't drive faster than your guardian angel can fly.

Anger is one thing you cant get rid of by loosing it.B)
M

Here are some more pics forgive me about having three posts after each other, because i can only put three pics on at a time.

Here are our birds. Blue chopper is surf patrol chopper. Yellow is Jhb trauma chopper.The other blue chopper with people hanging out is out police chopper.

Don't drive faster than your guardian angel can fly.

Anger is one thing you cant get rid of by loosing it.B)
M

whoops sorry bout this
Last edited by a moderator: Dec 26, 2008
Don't drive faster than your guardian angel can fly.