Called by an Sherriff for a sick person at a store.

31 y/o M supine on the ground. A&Ox4, very pale and diaphoretic. Pt was shopping and reported a syncopal episode with a sudden onset of abdominal pain, nausea, and vomiting.

Pt reports sharp, periumbilical pain and has difficulty remaining still or finding a position of comfort. Pt required a 2 person assist to the stretcher and unable to support himself. No recent illness, alcohol/drug use, or other recent symptoms.

( I was not AIC and drove to the hospital, so I don't really have any good reassessment answers, but it was a very short trip so there likely isn't anything significant to note. At least not that I am aware of) 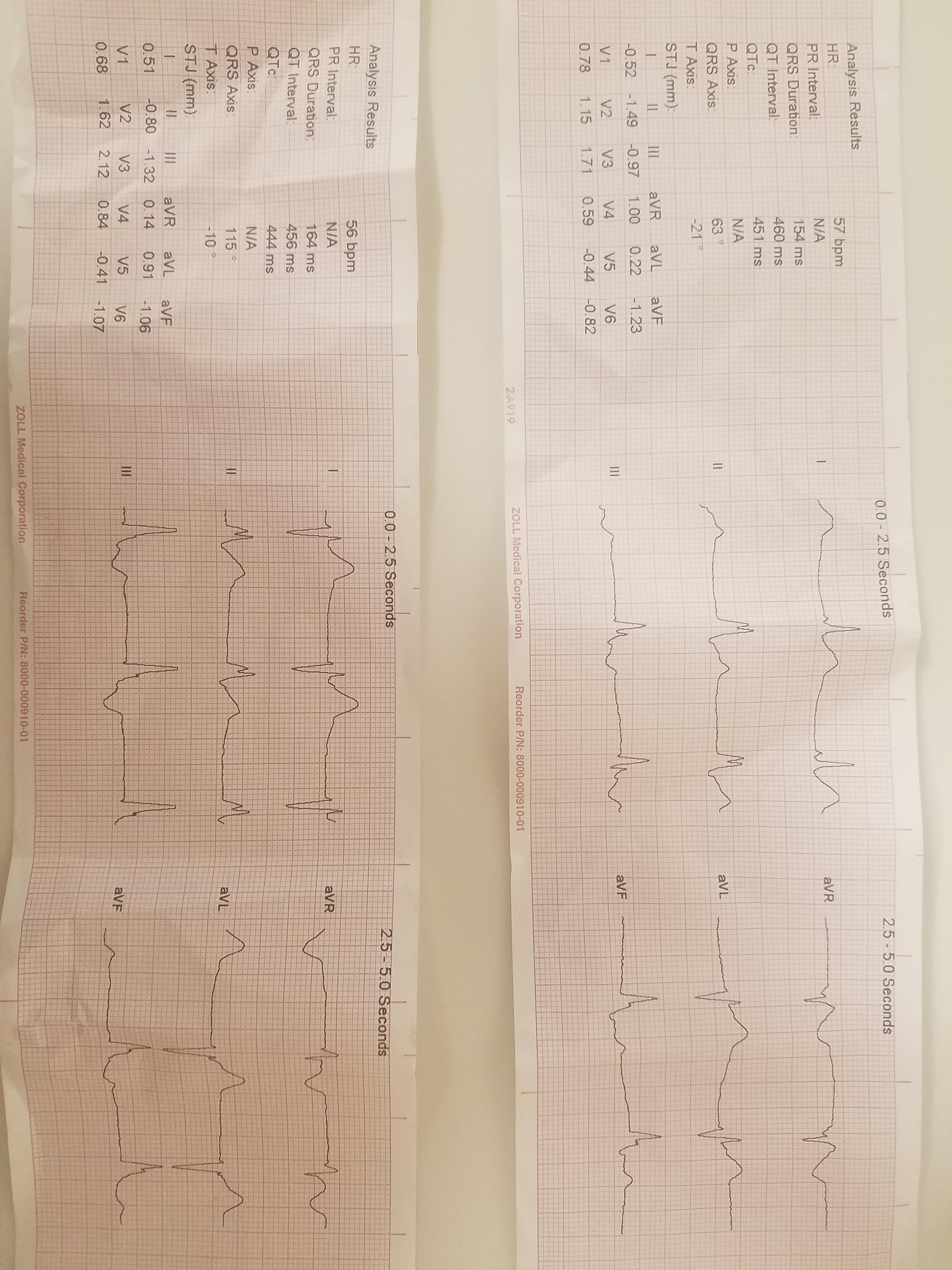 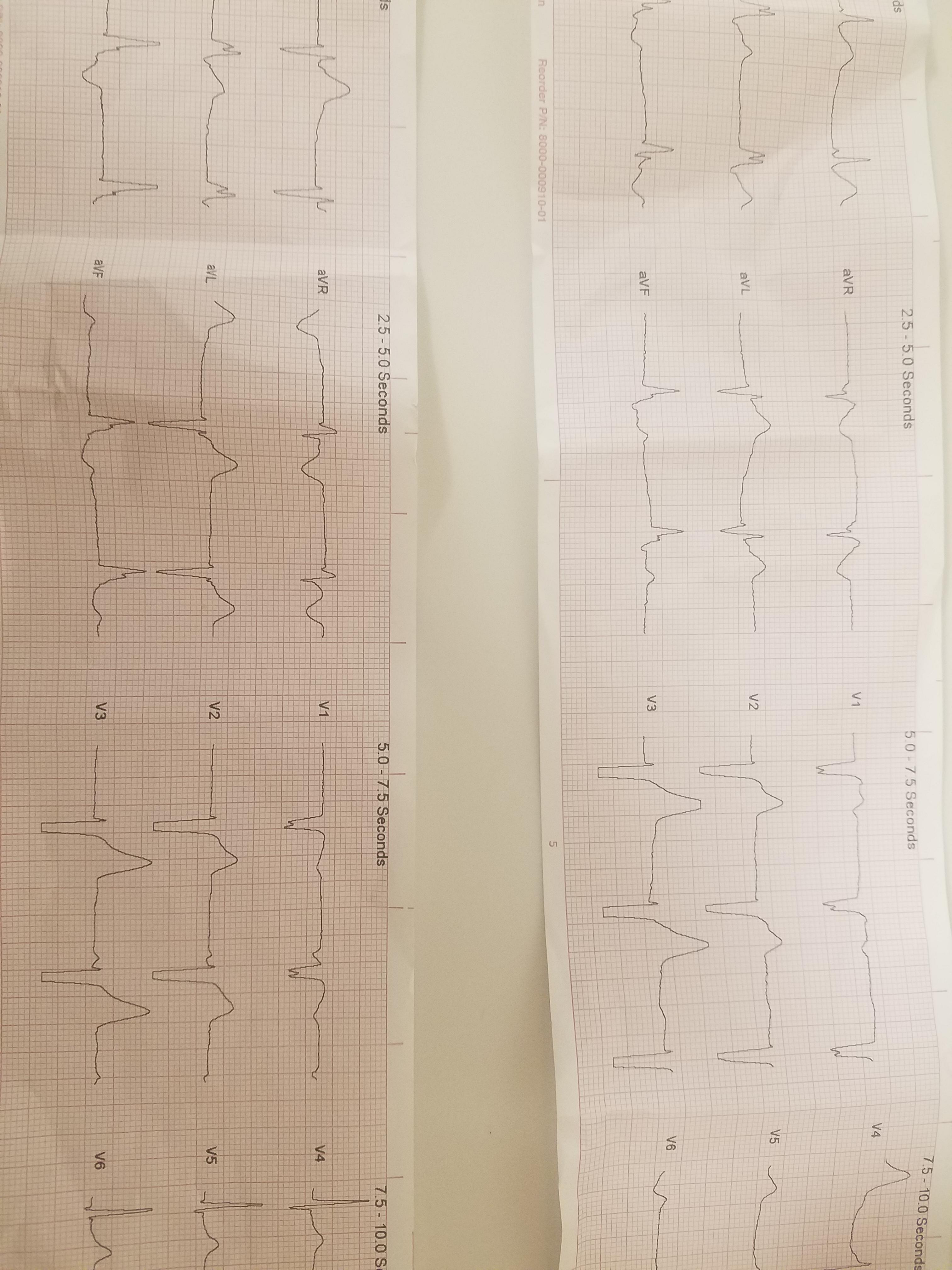 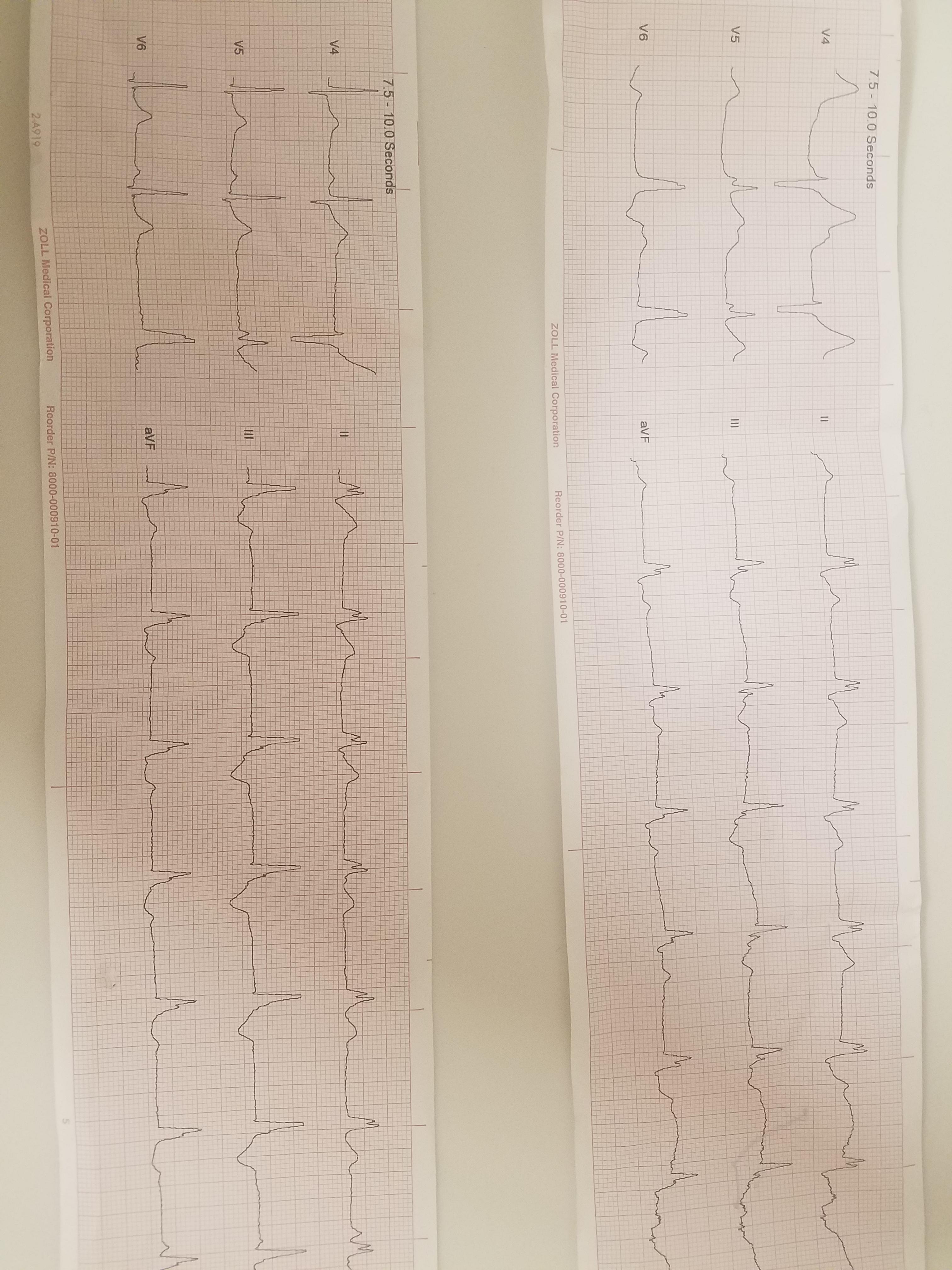 Based on history, aortic dissection. EKG: QRS is wide, did the patient have a pacer? Otherwise, this looks morphologically atypical for a BBB: ST changes (some STe in aVL in top 12 lead, some STd in II and III in bottom strip), T-wave is too big, P-waves intermittently seen in V1/V2 in top strip. The two EKGs have some marked differences between them-- possibly alternating into and out of a sinus rhythm and an aberrant conduction pathway that is junctional or even ventricular in origin. Hyperkalemia is also considered.
"The Law of Inverse Value: the less you contribute to society, the greater the trauma you can sustain with minimal to no physical sequelae"

“Two things are infinite: the universe and human stupidity; and I'm not sure about the universe.” ― Albert Einstein
OP
S

MonkeyArrow said:
Based on history, aortic dissection. EKG: QRS is wide, did the patient have a pacer? Otherwise, this looks morphologically atypical for a BBB: ST changes (some STe in aVL in top 12 lead, some STd in II and III in bottom strip), T-wave is too big, P-waves intermittently seen in V1/V2 in top strip. The two EKGs have some marked differences between them-- possibly alternating into and out of a sinus rhythm and an aberrant conduction pathway that is junctional or even ventricular in origin. Hyperkalemia is also considered.
Click to expand...

No Pacer. He was fluctuating between sinus bradycardia and whatever that aberrant conduction was.

I don't recall us getting one

StCEMT said:
I don't recall us getting one
Click to expand...

Initially was somewhat concerned with K levels given the wideness and large T waves, but I don't think this is a HyperK EKG. Anecdotally many of my HyperK patients were DKA hence the sugar question.

In any case that's a garbage EKG for someone of that age. I am going to try and rotate it cuz I'm getting neck pain trying to interpret it. 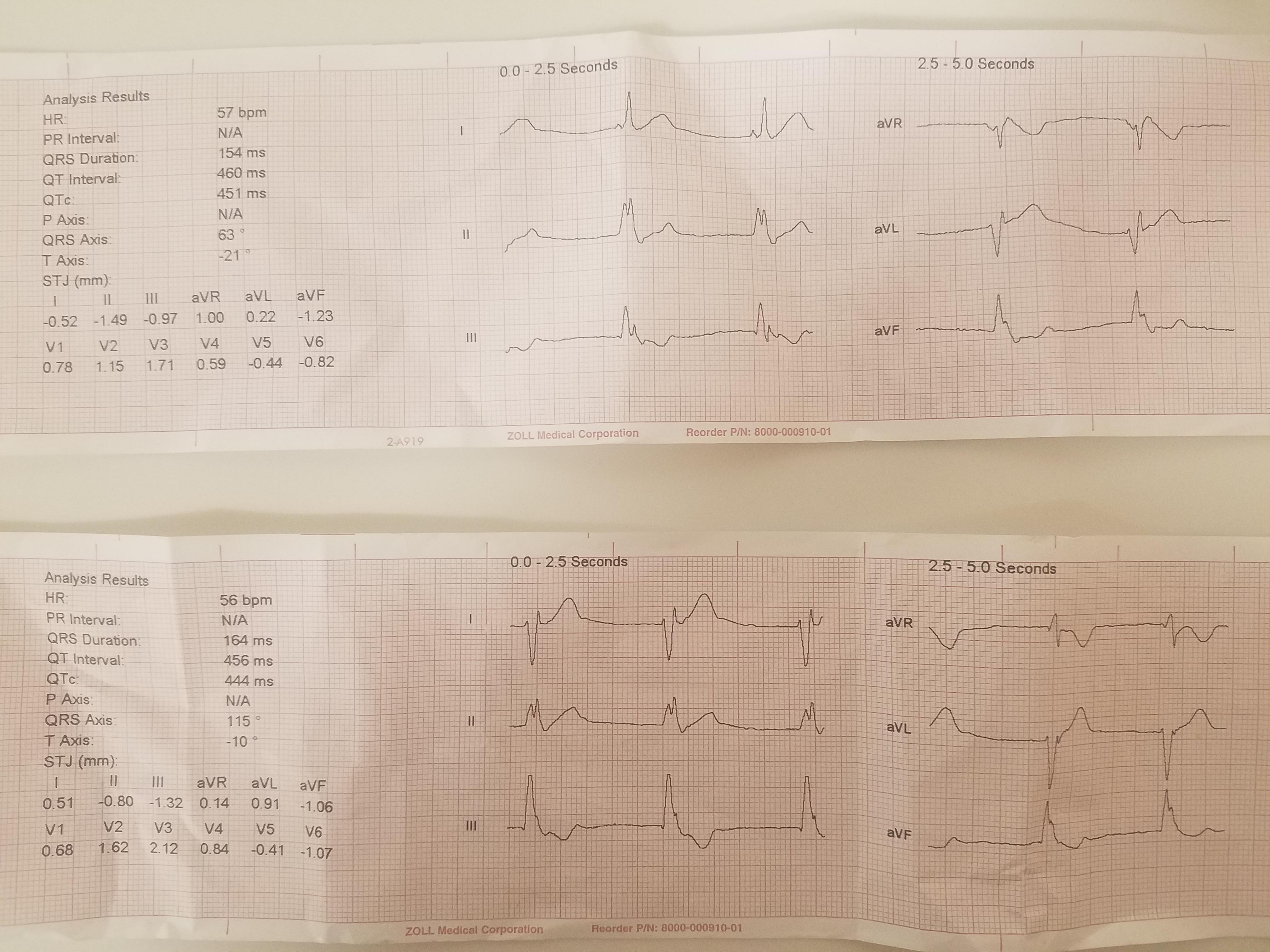 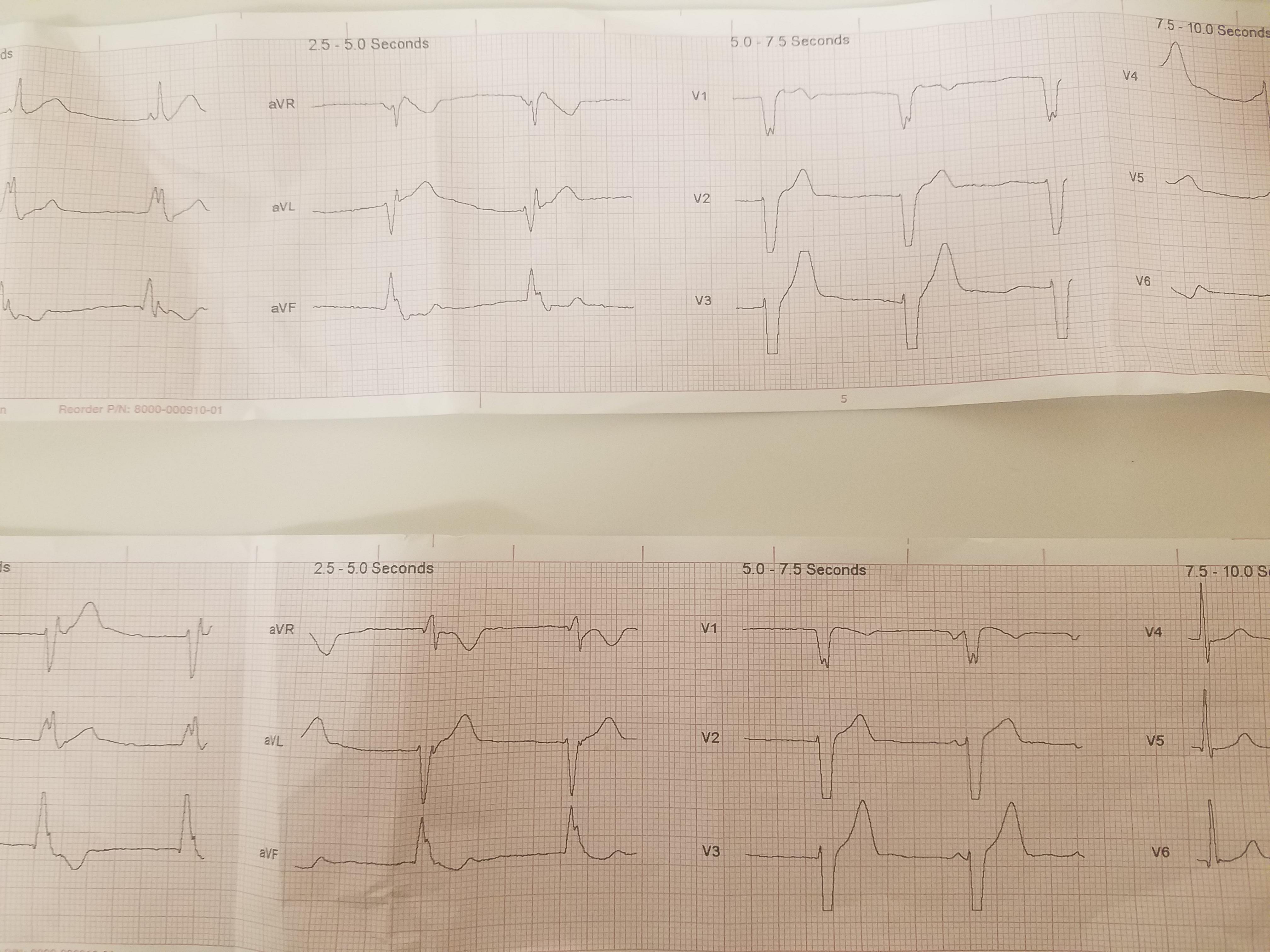 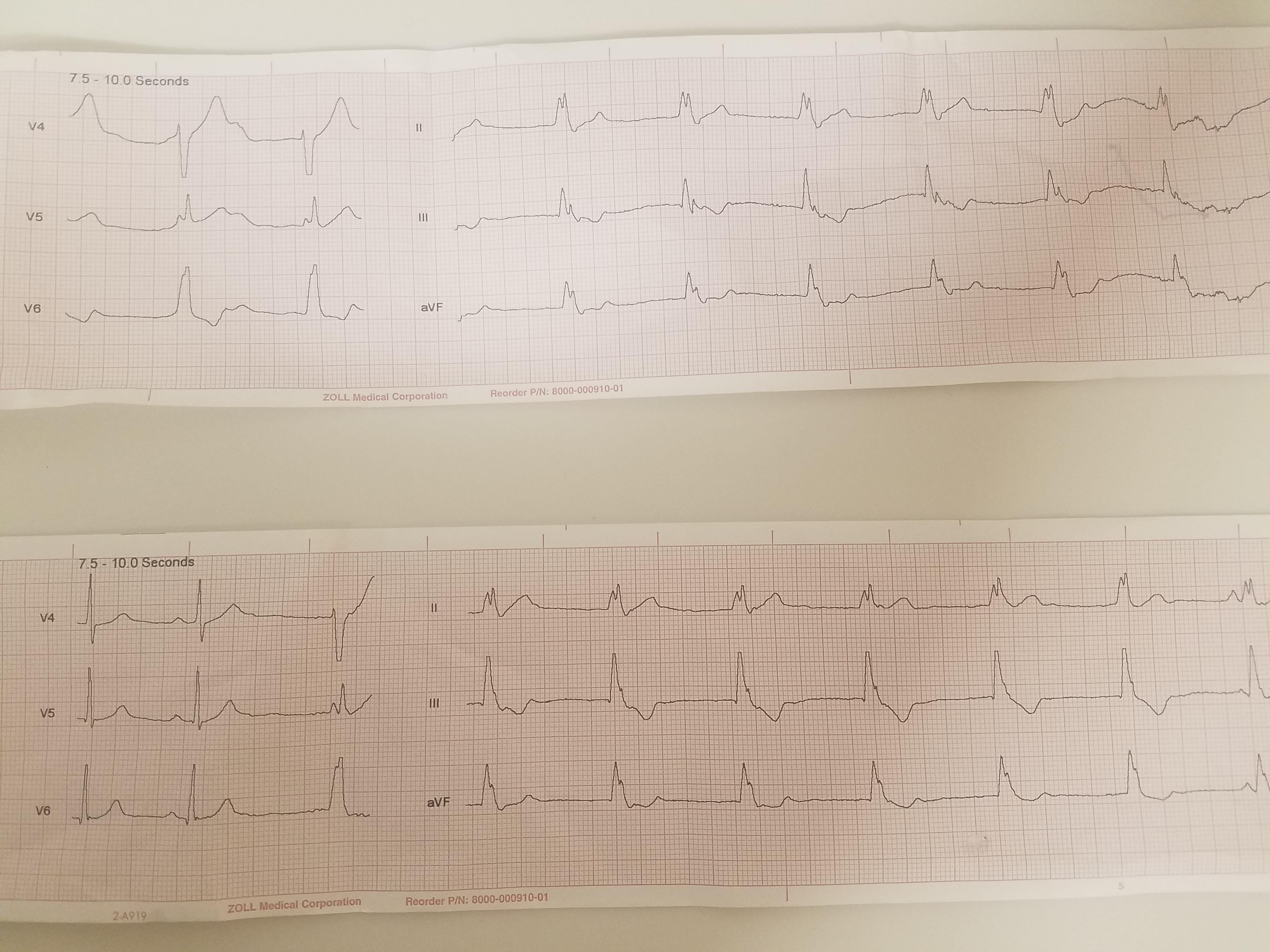 Let's do this like we teach the paramedic students for the top one...

This is a regular rhythm of approximately 58. A p wave does not reliably precede each QRS complex (though it appears it may be retrograde in some leads and with a short PRI in I). The QRS appears to be about 0.16 with an odd morphology. The T waves are proportionally a bit large. There don't appear to be any horrid ST changes.

All of this to say, sometimes you just don't know what to call it, or at least I don't. There is some sort of conduction abnormality. If the patient remains hemodynamically stable I don't think I would do much. If the QRS continued to widen I'd be concerned. Any chance of sodium channel blocker or TCA use?
Cost is high pay is low, cost is high pay is low. -Pepper, Rent
P

EKG: I only see one sinus beat on the second stip. Both seem to have some odd eptopic/escape pacemaker site, but the morphology is different between the two; there was no limb lead reversal between the two EKGs I assume? I would guess based on the BBB appearing morphology (and given that this isn't present in the sinus beat) that said sites are low on the bundle or fascicles. ST elevations don't seem greatly inappropriate given QRS morphology. ST morphology does appear biphasic in some samples, but I think it is probably due to the odd pacemaker site.

This patient is going to need quite the work up. With electrical changes I also consider cardiac disease, drugs/meds use/abuse, and electrolytes as top offenders. Cardiac sounds? PMI?

The belly pain is interesting. I think the question is whether the belly pain and associated symptoms are a result of cardiac disease, two complete different problems, or are they somewhat linked. Unfortunately I don't think that we can really determine that based on the limited information. Do you know what they ended up diagnosing in the ED?

Tigger said:
If the QRS continued to widen I'd be concerned. Any chance of sodium channel blocker or TCA use?
Click to expand...

In terms of QRS widening, I wouldn't put this into the same category as delayed or slowed depolarization as in potassium toxicity, it being a conduction defect.
OP
S

@Tigger technically it would widen. He'd fluctuate between a perfectly normal sinus rhythm and a wide complex rhythm inconsistent in morphology. Nope, no TCA or other med overdose.

@Peak no reversal, I placed those myself and can confirm that part. Like I said, no cardiac hx/drugs/other known issues. I didn't catch heart sounds, not sure if my partner did during transport. I doubt it given the short time.

And I do, just figured I'd let this ride for a bit before I put it up.
P

I don't, but if they're included in the detailed follow up I'm waiting on I'll let you know.
P

StCEMT said:
I don't, but if they're included in the detailed follow up I'm waiting on I'll let you know.
Click to expand...

Any recent viral illness (enen it if sub acute), strep like symptoms, or signs of ludwigs?
OP
S

Any recent viral illness (enen it if sub acute), strep like symptoms, or signs of ludwigs?
Click to expand...

I didn't get that specific, but no recent illnesses.

Since this has died down, he had massive dissection from the heart to the iliac I was told. Survived surgery, but died a day or two later in the ICU. Still waiting on CT's and the detailed report.
P

Did he look like he had marfan's?
OP
S

Tall and skinny? No.

Now for my question. Can any of y'all explain what about an aneurysm cause this transitional rhythm? Perfusion? Pressure against the heart? Other?
P

Typically we see a strain like pattern due to increased work load, often these can look like an MI (which can actually represent ischemia if the coronary OS is either dissected down or obstructed by the aortic disection).

When patients have extreme hypertension they can have reflex bradycardia and throw some funky escape beats. That being said this is pretty well sustained for that, and odd that he appears to have two different pacemaker sites.

Hearts that are in strain with previous disease are more likely to throw odd rhythms, for example patients with a history of valve disease/replacement, CHD repair (even for something like a asd or vsd), heart failure, history of peri/endo/myocarditis, et cetera.

A large number of aortic dissections do involve the aortic valve resulting in a murmur and valve insufficiency, but other than ischemic changes there isn't a lot documented in the literature about sustained dysrhythmia.

Some genetic syndromes have both risk factors for connective tissue disease and heart disease; marfans probably being one of the most common although Turners is also known for cardiac disease and disections, ehler danlos as well as a myriad of rare genetic disorders can also present these features although they are more rare.

I've also see a fair bit of sustained dysrhythmia in patients that have a low K, low ical, and a low mag. With out chronic disease, medication OD, or recent illness this os probably unlikely.

His rhythm is bizarre and not typical of disections. It's definitely a very interesting presentation.

Funky ekg's not an uncommon presentation for an ascending aortic dissection. The dissection begins in the ascending aorta and over time can extend anterograde to the iliacs and retrograde to the aortic root. annulus, and into the coronary arteries. Impaired perfusion to the SA, AV nodes and the his purkinje system isn't surprising.

Thanks for the interesting case.

Oh...forgot the very common pericardial effusion that can lead to tamponade , but not necessarily. Hematoma around the aortic root can contribute to impaired coronary flow in the absence of the dissection involving the coronaries directly.