This may be a stupid question but i have been working ems for a couple years now and i have never come to these situations. i have asked couple of people and they all gave me different answers. so i now ask you guys/girls.

1. use of AED on a neonate? is there any real age restrictions YES or NO
Im pretty sure its no but i have had partners say they used it.

2. Do you use an AED on a Stab or Shot to the chest?
Again im pretty sure its no but again have had partners who say they used it in these situations.

Thanks in advance for the responses.

To the best of my knowledge the only contraindications for an AED are non-shockable rhythm and a patient in standing water.
Pediatric pads would be ideal, but again if you don't have that luxury use what you have. I've been taught if the patient's chest is too small for typical pad placement to apply them anterior and posterior as close to normal as possible.
As for the penetrating trauma, no reason not to shock if they have a shockable rhythm.
OP
OP
M

Im going as per the nyc remsco protocols.
they state use aed on traumatic arrest but exclude aed on penetrating chest trauma.
and the neonatal resuscitation states to give CPR but does not mention AED.
I know the protocols are just a guide but id like to give the best care possible.
O

I've always heard no for traumatic cardiac arrest. About neonate, I can't tell you for certain so I will yield to someone with experience there.

Oh, and on standing water being a contraindication, check this study out.
http://www.aedadvantage.com/Defibrillation_on_a_wet_or_metal_surface.pdf

Grimes said:
Oh, and on standing water being a contraindication, check this study out.
http://www.aedadvantage.com/Defibrillation_on_a_wet_or_metal_surface.pdf
Click to expand...

I like it. My thought process was always just remove the patient from standing water, not too concerned with wet skin as long as there's no puddle.
Even without a risk to providers, how much less electricity is being delivered to the patient than after moving them to a dry location?

Does anyone have a protocol that says no AED in a "viable" traumatic arrest (I know, I know...) with VF/VT?
O

LACoGurneyjockey said:
Even without a risk to providers, how much less electricity is being delivered to the patient than after moving them to a dry location?
Click to expand...

If you read the table, negligible, when you compare it to the juice an AED will push. Or any defibrillator.

Would I do it IN a pool? Well, no. But just about everywhere else.

I was always taught that anything older than 30 days you can use an AED on.
You can use adult pads as long as they don't touch ( the conductive areas).

Don't know about absolute lowest age, but it likely is in pounds and not weeks or months old.
There is no contraindication to using an AED for anything, it just will not allow you to shock when the interpretation doesn't match its parameters and your training tells you not to do CPR if the pt is conscious etc.

Why would a penetrating wound preclude an AED? (Traumatic asystole is much less likely to resuscitate, but the AED could still be used…just ask the guys who sell the electrodes!).
"Let's use the word "I" instead of "You" or "They". Okay?
(and "PLEASE", Mycrofft! <_<)

Asystole is a symptom or syndrome. It will not be corrected by CPR if it is due to infarct, trauma, or poison. CPR buys your patient time to defintive care.
U

So, a few points about the electricity vis-a-vis defibrillation.

One of the big concepts is that dry skin is a piss poor conductor, it's got a resistance of somewhere in the vicinity of 100,000 ohms, comparatively the wet squishy stuff inside winds up being somewhere around 11,000 ohms in the average human. Wet skin, on the other hand, has a resistance of around 1,000 ohms, and a break in the skin under the pads/paddles allows the electricity to bypass the skin entirely.

If you play around with Ohm's and Joule's laws, you'll see that for a fixed number of joules, if there is a drop in resistance, the amperage goes up. So if you have a major reduction in the resistance, you're going to wind up delivery bigger jolt to the heart, which reduces the efficacy of the shock (and can actually cause new and exciting damage).

Modern defibrillators do something called impedance compensation, which basically measures the resistance between the pads before throwing the shock, then adjusts the shock sufficiently such that even if it's not actually a 200J shock, the delivery to the heart is the same as though it were. Personally, I don't believe in relying on impedance compensation for a few reasons: First, Who knows if that 15 year old defib the mall security brought you has it. Second, It's primarily designed to compensate for something called dielectric breakdown in the skin (basically, every time you shock, you reduce the resistance of that skin), which is usually a much smaller change than wet skin. Third, I never trust my machines any more than I absolutely have to.

The other consideration is the matter of the electricity deciding to skip going through the body and instead rolling right across the skin, which would both burn the skin and, you know, not actually deliver any electricity to the heart. With modern pads, this is largely a theoretical danger only, a whole bunch of things would have to go wrong for it to happen, even if the skin was quite wet. That being said, I believe in acting as though every scenario was the worst possible one. You should try your damndest for at least a centimeter of separation from pad edge to pad edge, and at least take a quick swipe at removing some water from the skin, not only under the pads, but also between them.

tl;dr: With modern equipment, it shouldn't be any problem to defib on wet skin, but you should probably try not to, and you should try for a little distance between your pads. With old equipment there are a number of potential problems, and unsurprisingly, a whole bunch of the lore of our industry is based on old knowledge.

The AHA used to have "no recommendation" for AED on infants (<1yr), due to lack of evidence. In 2010 they switched to recommending it if necessary, same as for other peds. (I would have to check, but I don't THINK this was based on very much new data, more just the decision that the benefit was probably greater than the risk.)

With that said it shouldn't come up much. Infants don't usually arrest from primary cardiac etiologies.
May I never see in the patient anything but a fellow creature in pain.​
– Oath of Maimonides​

I contacted Zoll about zapping in wet circumstances. Told not in standing water but "damp" earth ok. Probably a salesperson.

Me, I'd drag them that extra fifteen feet (two seconds?) to something a little better.

Unkie, what about this? (Thanks for the earlier reply it was great)
1. Remove medication patch
2. Apply pad over remnant medication
3. Resulting electricity forces more med into the patient? (Get a flush of progesterone or nitro or whatever).
"Let's use the word "I" instead of "You" or "They". Okay?
(and "PLEASE", Mycrofft! <_<)

Current teaching from Red Cross and Heart and Stroke is:

AED can be used on any age, including neonates. (For neonatal resuscitation, prioritize airway and oxygenation as that is more likely the cause of arrest versus arrhythmia).

AED is NOT contraindicated in traumatic arrest, however, good quality compressions should be the priority.

Up here we teach the "splash test" in regards to patients in wet areas. If the water is deep enough that I can make it splash with my foot, move the patient. Wet sidewalk in the rain, damp field, etc, are all ok.
H

I've shocked a drowning victim on wet sand and I'm still here.
Everyone else beat me to it.

usalsfyre said:
TransportJockey as my partner sound like it would be made of win smothered in awsomesauce...
Click to expand...

TransportJockey said:
Everyone beat me to what needed to be said... But will someone tell me WHY some of ya'll are taught no AED for traumatic arrests?
Click to expand...

Same reason I would stop the major bleeding before preforming CPR. Pt went into cardiac arrest due to low cardiac output due to hypovolemia due to trauma.

Say its a shockable rhythm, you get a pulse again. Unless you're doing a transfusion, now, then what? You lose the heart any second.

TransportJockey said:
Everyone beat me to what needed to be said... But will someone tell me WHY some of ya'll are taught no AED for traumatic arrests?
Click to expand...

Unlikely to work, very unlikely to "stay worked"... barring a cardiac cause of the trauma (the stereotypical MI -> MVA) or something like commotio cordis, traumatic arrest is the classic example of an asystolic/PEA arrest due to physiological collapse (eg. hypovolemia). Nothing much is going to change unless you reverse the cause, which at best usually requires surgery and at worst a time machine. (Exceptions being maybe primarily hypoxic arrest due to a blocked airways or respiratory depression, and a tension pneumo you've decompressed.)

It's not impossible that the end will be presaged by a brief hiccup of a shockable rhythm. But unless you found a way to change the song that's playing, it's still the end.
May I never see in the patient anything but a fellow creature in pain.​
– Oath of Maimonides​

Then there's the "I know all we have is an AED and the pt's probably having cardiac trouble, but don't put an AED on him because it will frighten him or her into a heart attack". 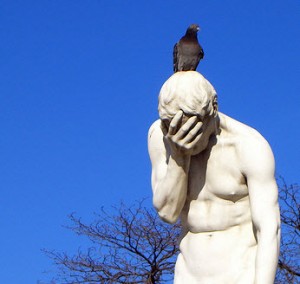 mycrofft said:
Then there's the "I know all we have is an AED and the pt's probably having cardiac trouble, but don't put an AED on him because it will frighten him or her into a heart attack".

Thaaat's a new one to me...
May I never see in the patient anything but a fellow creature in pain.​
– Oath of Maimonides​