Also, for me personally, it feels like some SVT can look like Vtach. What is a sure way to tell the difference between the two?
For example: 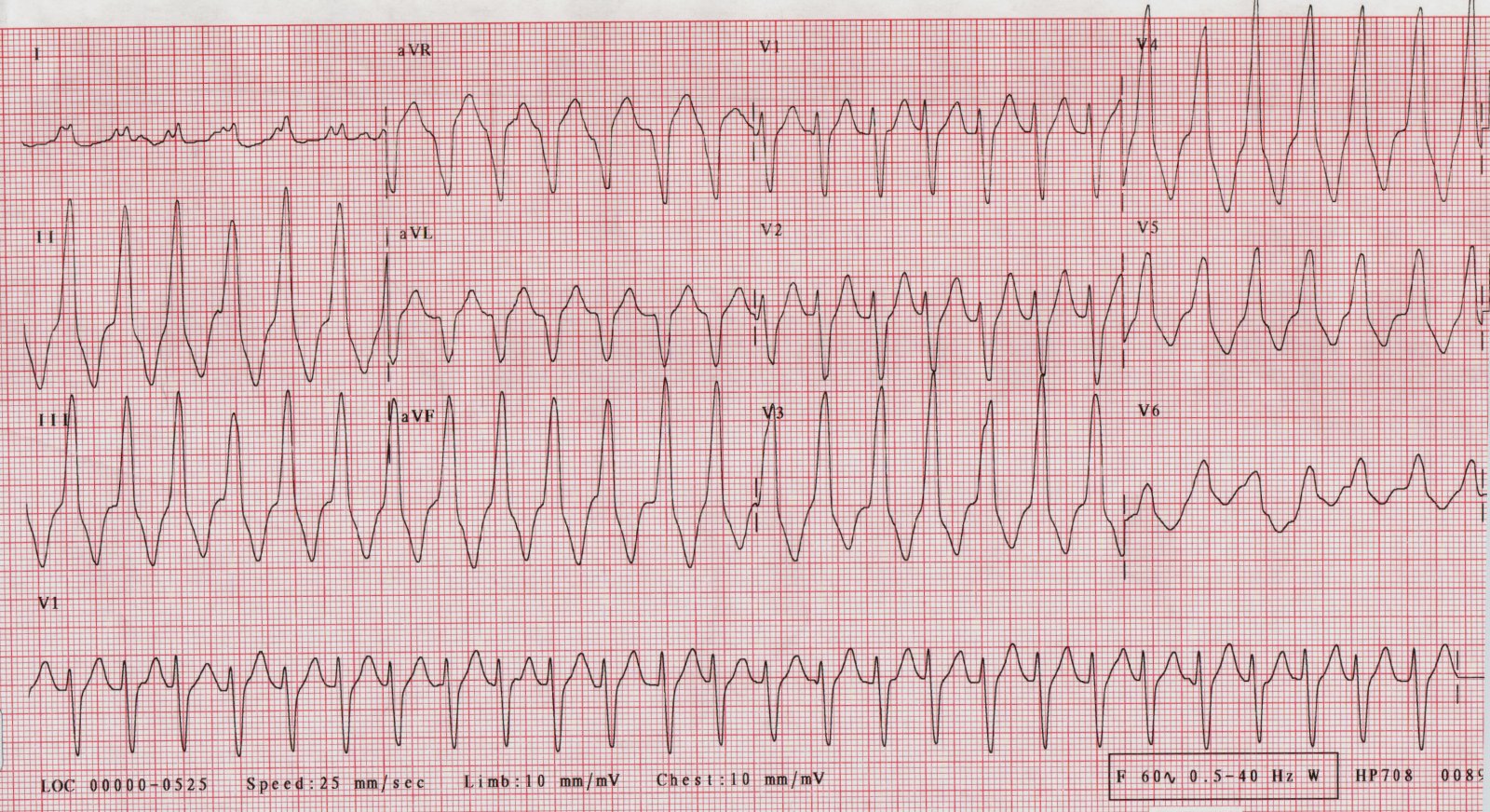 The way you tell is axis deviation and QRS duration. The best strategy is instead of thinking v-tach just think wide complex tachycardia.

And I think the best treatment for any EXTREME cardiac dysrythmia is fluid boluses, and slap them AED pads on them (just to be safe). Also ETCO2 helps alot with assessment of cardiac patients

Very simple. Wide and fast is VT until proven otherwise. Just know that VT can have a frontal plane axis in any quadrant. The most common error is to call VT "SVT with aberrancy" (happens all the time). Your example does not look like SVT to me. In fact it shows RVOT-VT (VT originating in the right ventricular outflow tract). It has LBBB morphology in lead V1 with a normal frontal plane axis and transition (negative to positive QRS) between leads V2 and V3. It only has to be 3 small blocks wide to be considered "wide" (120 ms). Also, when there is a general pattern of T-wave discordance it also points to an abnormal depolarization (like you would get from a wide QRS from any cause). Compare to a narrow complex tachycardia like this: https://www.aclsmedicaltraining.com/blog/treating-supraventricular-tachycardia-with-adenosine/. I did a 60-second soapbox on this at ALiEM (scroll down): http://www.aliem.com/60-second-soapbox-abernethy-pain-medications-bellew-posttest-probability-bouthillet-wide-complex-tachycardia/ but we've been pushing back against the "SVT with aberrancy" mentality at ems12lead.com for many years. Christopher takes down some WCT myths here and here.

I'm glad you popped in, Tom. You explained it much better than I was about to before seeing your post...
"Beware of false knowledge; it is more dangerous than ignorance."
-George Bernard Shaw
A

Usually arrhythmias have a blanket treatment depending on whether the patient is symptomatic due to the rate being too fast or slow. You'd follow the ACLS algorithm for symptomatic bradycardia or tachycardia. Common drugs for bradycardia are atropine, dopamine, and epinephrine. Common drugs for tachycardia are adenonsine, lidocaine, and amiodarone. Unstable patients are treated with electricity.

It's not usually recommended to treat PVCs. They are very commonly ignored. Where I did my paramedic internship at, paramedics were allowed to treat frequent PVCs with lidocaine, but not anymore. I believe these patients used to be treated with class Ic antiarrhythmics, but that was discontinued.

From what I've learned, 2nd degree AVB type I (Wenckebach) is usually tolerable and does not require treatment. I've only appreciated this or recognized this once in a patient that was being discharged from the hospital after being treated for pneumonia.

There are many criteria used to differentiate VT vs SVT with aberrancy. The most common one I've seen used or discussed is Brugada's criteria.

Step 1 Are there any RS complexes in the precordial leads (leads V1-V6)? If not, it's VT.

Another way people may ask this is are the precordial leads all concordant ie are they all positive or all negative. If they are, it's VT.

If VT is not diagnosed, move to step 2.

Step 2 In any of the precordial leads with an RS wave, is the R-wave wide? Specifically is from the start of the R-wave to the nadir of the S-wave (pointy tip of it) at least 100 ms? If so, it's VT.

This step alone is called Brugada's sign. I'm not sure if the sign can be used in any lead. I've never read anything that has specified it. In Brugada's criteria or algorithm for VT, it is only the precordial leads.

If VT is not diagnosed, move to step 3.

Step 3 Is there AV dissociation? Do the P-waves not correlate with the QRS complex? If so, it's VT.

In my opinion, this is one of the worst criteria. It's usually hard to differentiate this from artifact. Try to march out the P-waves if you think you see it. I usually skip this step.

If VT is not diagnosed, move to step 4.

Step 4 Does it have typical bundle branch block (BBB) morphology? If not, it's VT.

If neither meet VT criteria in step 4 and you've gone through all the step, that favors SVT with aberrancy.

BBB morphology is usually the first thing I notice when differentiating VT vs SVT with aberrancy. It's usually the quickest and easiest way for me to recognize it is VT.

Typical morphology for RBBB in lead V1 is an rsR' wave. It can have a qR wave, but I've read this is more favorable for VT if it has this instead.

Typical morphology for LBBB in lead V1 is an rS wave and the R-wave is very very very small and narrow.

In LBBB, lead I and V6 will have a mostly (if not all) positive R-wave. Sometimes the R-wave will have a little dip in the center of it, but nothing that comes even close to the isoelectric line.

With practice, you can immediately recognize it is very likely it is VT at just a glance.

The reason I kind of like this criteria the most is interesting, but I am not sure if it is correct. I'll explain it anyhow. The foci of the VT changes the morphology of the QRS complex. If the foci originates from the right ventricle, it'll have LBBB-like morphology. If the foci originates from the left ventricle, it'll have RBBB-like morphology. I believe this is for the same reason you see LBBB and RBBB. In LBBB, the left side of the heart is last to depolarize because of a block on the left side. In RBBB, the right side of the heart is last to depolarize because of a block on the right side. It makes sense that if the foci is on the right side, the right side depolarize first and the left side is last to depolarizing giving it LBBB-like morphology. It makes sense that if the foci is on the left side, the left side is depolarizing first and the right side is last to depolarize giving it a RBBB-like morphology. This also means that where the foci is, the QRS morphology is going to change. The QRS morphology says a lot about where the foci originates. This is true for paced rhythms also (where the pacer wires are placed). Anyhow, since the foci can be anywhere in the ventricles in VT, the QRS morphology can vary a lot with VT! However, SVT stands for supraventricular tachycardia. Surpa means above. Supraventricular means above the ventricle. This means that the ventricles are almost always depolarized starting at the top from the AV node (unless there is an accessory pathway like with Wolff Parkinson White syndrome, which can be indistinguishable from VT if the rhythm is an antidromic AVRT) and down. This means SVT with aberrancy will usually have a very predictable QRS pattern while VT will not. This also means that there are a lot of criteria that are very specific to VT (ie if the finding is present, it is very likely to be VT because SVT is unlikely to make that finding), but is not sensitive (ie just because the finding is not present doesn't mean it is not VT... because VT can present in all shapes and forms depending on the foci). Hope that makes sense!

This also means that there are a lot of criteria that are very specific to VT (ie if the finding is present, it is very likely to be VT because SVT is unlikely to make that finding), but is not sensitive (ie just because the finding is not present doesn't mean it is not VT... because VT can present in all shapes and forms depending on the foci).
Click to expand...

People make the grave mistake of thinking that lack of extreme right axis deviation means that it is not VT. This is incorrect. This means that the foci probably didn't originate at the apex of the heart, but it could have still originated from the ventricles. VT can have any axis like Tom said (eg septal fascicular VT will have RBBB morphology with normal axis).

The other thing is looking for fusion or captured beats. You'll see wide complex tachycardia and then all of the sudden a lone (or couple of) narrow regularly looking beats (capture beat) and/or semi wide beats that are like an in between PVC and regular beat (fusion beat). Very specific for VT with AV dissocation where the atria and ventricle happen to depolarize at the perfect time.

Another thing people look for is notching between beginning for the S-wave to the nadir of the S-wave called Josepheson's sign.

Older patients (>35 years old) and history of heart disease (eg MI) increase the likelihood of it being VT. Being young doesn't rule out VT.

I totally agree with "VT until proven otherwise". One of my favorite differential I've seen posted for wide complex tachycardia is

If you are thinking it is possibly VT, it probably is VT.

This is really beyond what they usually teach at paramedic school, but I couldn't help myself typing this. This is about the only paramedic thing I am good at. :[

Here's a good starting point, and I'm gonna copy what I said in another thread.

As with any drug, try to look at the underlying physiology you're working on. Drugs do either one or two things:

A) Block some type of physio, or

B) Stimulate some type of physio

This is relevant because, (and this is really interesting to me) the atrium is the ONLY membrane in the entire body that uses calcium to depolarize. That immediately draws a line between the usage of sodium channel blockers and calcium channel blockers, because inversely, the ventricles use sodium to depolarize. Atrial arrythmia? Block calcium. Ventricular arrythmia? Block sodium.

With that in mind, we don't treat PVC's for the sake of treating PVC's; they usually have to be a post-arrest showing signs of wanting to code again (frequent, multifocal PVCs combined with the rest of the clinical picture)

As for the heart blocks, look up how atropine works. Notice that it's simply blocking inhibitory signals, not directly stimulating the heart. This is why there's such a relatively low ceiling on how much you give.

That being said however, don't forsake studying the electricity. There's a clear (read: sometimes muddy) line between when they need to be shocked (or paced ), and when they need drugs. Sometimes they need both.