Can someone break down ETCO2 for me?

I know the basics about it dealing with CO2 and ventilation.

But past that, I'm trying to figure out about a bit more.

"Waveform capnography represents the amount of carbon dioxide in exhaled air which is used to assess ventilation. The number is capnometry, which is the partial pressure of CO2 detected at the end of exhalation. This is end-tidal CO2 (ETCO2) which is normally 35-45 mm Hg" is what I was told.

The partial pressure, that's confusing to me. Is that coming from the value of the percentage of pressure the CO2 gives off or extrapolating what the pressure would be of the volume was 100% CO2 or what? ELI5 on what it means and how this affects patients.

Why do we measure it in pressure rather than percent of CO2 per breath? Or is that what that is?
S

Using the air around you as an example, partial pressure is just that. A part of the whole.

If you look at the diagram I attached, you'll see the partial pressure is highest in the air and decreases to the point of venous blood that has given its oxygen to the tissue and is returning to the heart. So gasses are going to move from an area of high concentration in the air to a lower concentration in the capillaries within the lungs.

So you've already been taught the concept of diffusion where things move from high to low. Thats what happens here. Oxygen is moving down that pressure gradient and diffusing into the capillaries which has a lower pressure. Kinda like those flavored drink mixes. You buy a bottle which is super concentrated. You squirt a few drops in and it doesn't stay in a dense, concentrated state. It diffuses into the water. It moved from a high concentration to low.

What is partial pressure of oxygen in blood? | Socratic

P_"O₂" ≈ 100 mmHg in arterial blood, but it is different in other locations. > Here's a simplified diagram if the respiratory system. (From www.studyblue.com) In ambient air, P_"O₂" = 160 mmHg. In the alveoli P_"O₂" in the alveoli is about 104 mmHg The partial pressure in the alveoli is less...

Does anyone utilize end tidal C02 at the BLS level? (EMT -B) In the state I live in (CT) many BLS only units have 12 lead monitors with the capability.
emtlife.com
There are numerous other threads that beat this topic to death. I’m also almost certain there’s free con-ed that does the same.

ETA: my point being, there are enough resources to explain it the way that best works for you. Sometimes that’s the better answer.
I’d rather a handful of lightning than a mouthful of thunder.

It is not a percentage. It is only a part that is actually measured. 35-45mmHG. The measurement of how much pressure it takes to move mercury no many millimeters. That is the measurement that is used. In order to give you a visual description look up a video of the old style blood pressures used in antique sphymomanometer 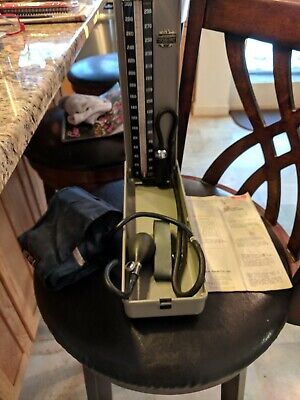 Tubing is in good condition. Made in the USA.
www.ebay.com

If you'll zoom in you will see a small amount of something silver. That is mercury. You squeeze the bulb and the air will displace the mercury upwards so many millimeters in order to read a blood pressure. They use the same measurement for PACO and PaO2.
Mike Hester, RRT/NRP/FP-C
"You are what you are because of what goes into your mind" - Zig Ziglar
You must log in or register to reply here.
Share:
Facebook Twitter Reddit Pinterest Tumblr WhatsApp Email Share Link
Top